This question crossed my mind when I saw a new card in the digital collectible-card game Hearthstone (HS). The card belongs to the latest expansion named ‘Journey to Un’Goro’ and is called ‘Time Warp’. ‘Time Warp’ looks like this: 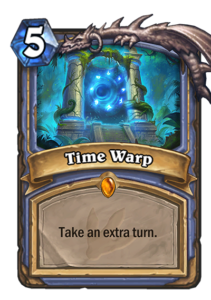 The reason I have become so interested in this card is because it looks incredibly similar to another card, in another collectible-card game (CCG) called Magic the Gathering (MTG). The name of this card is also ‘Time Warp’, and here is what it looks like: 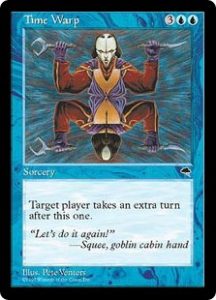 Now, you might see the similarities but if not I will explain them as best I can. These are two cards from distinct games with the same effect. They give you the ability to take an extra turn after the turn you have just taken. They both cost 5 ‘mana’, or ‘mana crystals’ which have to be paid to play the card for its effect. Finally and probably the easiest to understand, they have the same name which is ‘Time Warp’. They are both, in my eyes, the same concept or idea. ‘Time Warp’ from the game MTG, came out in the ‘Tempest’ expansion in the year 1997 and the ‘Time Warp’ from the game HS comes out this year (2017) which puts the card releases 20 years apart. Funnily enough, the duration of a Patent is also 20 years, hmmm…

Someone could argue that this is HS using MTG’s idea, however HS has grounds for demonstrating that the card is copied from their own previous work in their most ubiquitous title, ‘World of Warcraft’ (WoW). While HS and WoW do not share the same game mechanics and are in completely separate game categories, HS draws inspiration and tries to emulate aspects of WoW since it is a spin off title from WoW. Many of the cards in HS are character specific abilities from WoW and the card ‘Time Warp’ is no exception. Here is a picture of the information WoW gives on the ability ‘Time Warp’: 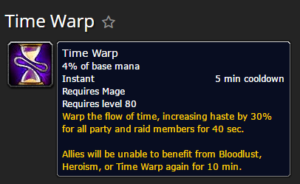 WoW was released in 2004 and contained the ability ‘Time Warp’ with it. The reason for giving the dates isn’t because they are relevant to the actual rights but rather I find it interesting to see the historical perspective of ‘Time Warp’. My Senior Lecturer in intellectual property reminded me of an even earlier ‘Time Warp’ which was sung in the Rocky Horror Picture Show in 1975…

Copyright protects; the artwork of ‘Time Warp’ for both HS and MTG; the text on the cards and the source code in HS as literary works; the sounds and animations in HS when you play the card. Dealing with them respectively; the text is also not exactly the same apart from the name of the card where the issue is how many words constitutes a literary work, as such it would be better resolved in trademark; the artwork and framing of the cards is not copied, each is unique; MTG cards do not have accompanying sounds and animations when you play it (unless you choose to create them yourself) and finally MTG is physical and does not have source code (unless we live in the Matrix). The problem is that the respective ‘Time Warp’ cards are in different mediums, for me this is annoying because the games are very similar and so are the cards. Copyright does not really help my case for ‘Time Warp’.

In theory obtaining a patent would be the best way to protect ‘Time Warp’ as it is an idea and not an expression and patents protect ideas. Unfortunately games are excluded from patentability under Section 1(2)(c) of the Patents Act 1977 which states that “a scheme, rule or method for performing a mental act, playing a game or doing business, or a program for a computer.” I was interested in the idea of patenting individual cards but it would be vastly more expensive and would also be excluded. Sadly Patent law won’t help me either.

Another method for seeking protection of ‘Time Warp’ may be submitting it as a design. However this won’t work as designs can only be 3D and a MTG card would be classed as a 2D object (despite being 3D). HS cards are not even physical objects.

Finally, trademarks could help us but it would require that the name ‘Time Warp’ was not in use for anything else and unfortunately it had been used in 1975 in the Rocky Horror Show…

To sum up, there is relatively scant protection for ‘Time Warp’. I’m not suggesting that this a legal challenge waiting to happen, because I’m sure it would fail, however I do find it interesting that ideas in video or physical games are not protected by Intellectual Property like music or art etc. The situation that I have just shown hopefully illustrates my point that two similar, yet distinct games have the same effect and thus the same idea but there is no challenge because there is no right which has been violated. Whether this is a good or a bad thing is another question which would require me to take an extra turn.

6,845 thoughts on “How does Intellectual Property protect certain ideas in games? The case of ‘Time Warp’”