The latest expansion of Hearthstone, ‘Journey to Un’Goro’ was released last week and the ‘Year of the Mammoth’ has began the new era of the ‘Standard’ format. To mark this event and in accordance with the rotation of sets in standard, ‘Blackrock Mountain’, ‘The Grand Tournament’ and ‘League of Explorers’ are not playable in the format but are in ‘Wild’ format. In addition some radical changes to the ‘Classic’ set took place which saw some heavily utilised neutral cards being castigated to the ‘Wild’ format and joining what is called the ‘Hall of Fame’.

Overall, Hearthstone feels like a new place. Interestingly, we are seeing some very unique decks that utilise cards that have never been used in competitive decks. For instance, ‘Stonetusk Boar’: 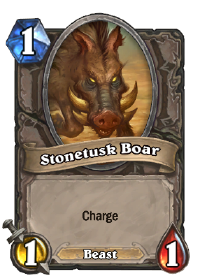 This card is being played in a new midrange ‘Rogue Quest’ deck that is causing many to despair by how good it is (not a great example). For me this is particularly satisfying because we are seeing a card that many considered to be rubbish being used to great effect.

Another satisfying thing that I have witnessed is the utilisation of cards that many complained of in the past or could not see the use properly. My first example, which caused one of the greatest controversies in the HS community, is ‘Purify’: 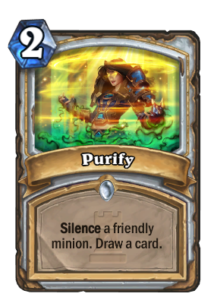 At the time that this was revealed in the then upcoming adventure ‘One Night in Karazhan’, many were angered by how weak this card seemed and that as a common it would make priest weaker in Arena. Priest was also one of the weaker hero classes and the community felt that cards were not being released which would make priest more powerful. The outrage was frustrating to me because some cards are made not to be obviously powerful and these cards are called ‘sleepers’. They sit in your collection until another synergistic card is released which improves the deck it is played in. Silence priest now has enough redundancy to be valid (possibly tier 1) and purify is a 2-of in that deck.

The next card was nowhere near as controversial as ‘Purify’ but had the same volatile reaction of the HS community. This time it was ‘Gadgetzan Ferryman’ which was being released in ‘Mean Streets of Gadgetzan’ as a Rogue card: 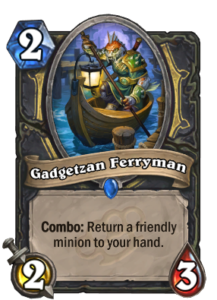 People looked at this card and saw it as a strictly worse version of ‘Youthful Brewmaster’: 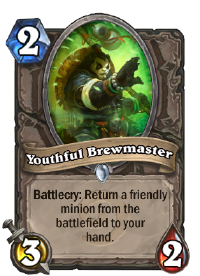 While this is true for the most part in an objective comparison, it does not account for what ‘Ferryman’ did, which was to provide redundancy in its ability. This redundancy has formed the backbone of the earlier stated midrange ‘Rogue Quest’ deck. Players at the time were again, annoyed with the Rogue hero class being positioned low in the hero rankings. ‘Ferryman’ was just another card that didn’t help the class right then and there so people slated it. Rogue is seeing quite a lot of play right now and there is currently a Megathread on HS’s Reddit page discussing how broken the Quest deck is.

So there you have it, a couple examples where people were wrong but not really… My point is not to be Captain Hindsight and say we should have known but rather to be Corporal Foresight and say that we should expect some cards in the future to synergise well with it. Yes.. well, it’s not a brilliant point.

Having just been thoroughly disillusioned with Hearthstone, I can say that the new expansion has relit my passion for the game. Currently we are in the best place where people are trying new decks out and the meta has not yet settled. I have hope that from the unprecedented number of archetypes I have seen in this short period of time, most will survive, evolve and become viable.

16,856 thoughts on “Hearthstone’s Meta shake-up and why we were wrong”